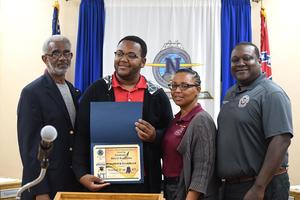 Junior Quadrick Bradford, son of Robert and Sharon Bradford, was honored for his accomplishment at the Tuesday, October 15 Board Meeting of the Natchez-Adams School District.

“I encourage you to share your success with other students in the District,” said Fred Butcher, Superintendent. “It takes hard work and dedication to achieve such a feat.”

When asked by Board Vice President Phillip West what career path he planned to pursue, Bradford replied, “I would like to major in computer science.”

“You have an opportunity to hit a perfect score,” said School Board President Amos James. According to an ACT report, approximately one-tenth of one percent of students who take the exam nationwide earn a 36.