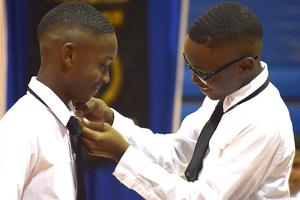 Teachers, administrators, and family members were on hand to welcome a crop of new members into Jr. Beta Club

School Principal Shamekia Rankin was pleased that 33 Morgantown students met both the scholastic and exemplary character requirements to become members. "Each one of you has the ability to serve as role models for other students at our school," said Rankin to the group. "Wake up every morning knowing that you are the elite here at Morgantown and realize that what you do makes a difference, even if it’s a small difference."

The ceremony was organized by Beta sponsors, Alison Hughes, Lana Brown, and Terinney Williams. The new inductees received their certificates and took the Junior Beta Pledge. Music for the ceremony was provided by Natchez Middle School Choral Director, Travanti Hill.