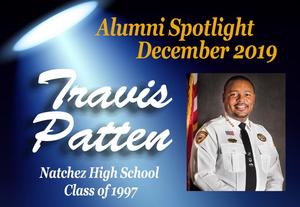 Patten is a Natchez High School Class of 1997 graduate
In August of 2015, Travis L. Patten ran for the office of sheriff of Adams County, MS. On January 5, 2016, Travis L. Patten was sworn in as the youngest Sheriff in the history of Adams County, and the first African American Sheriff since Reconstruction. Since his election as Sheriff, he has walked a virtuous path, leading to total reconstruction of department policies and practices. Sheriff Patten has implemented policies and procedures regarding transparency, trust, honesty, due diligence, and above all, respect and honor for the job.
Born and reared in Adams County, MS, Sheriff Travis Patten is a dedicated public servant who graduated from Natchez High School in 1997. After graduating high school, Sheriff Patten began his carer n active military service for the United States Navy. During his service tenure, he was enlisted in the duty of Damage Control-Man with command leadership responsibilities including but not limited to; standing watch, firefighting, conducting safety training, and patrol for the fourteen distinct Control-Man teams he supervised.
Sheriff Patten and his family returned home after departing from military service. He worked with the Claiborne County Sheriff’s Department as a criminal patrol deputy until he was hired by the Natchez Police Department as a criminal patrol deputy until he was hired by The Natchez Police Department in 2000 and worked in the capacity of Housing Officer and Patrolman.
Between the years 2000 and 2004, while working as a patrolman, the name “Officer Patten” became a well-represented name throughout the Natchez Housing Authority Community. At that time, Sheriff Patten’s name, presence and strong moral values and beliefs became regularly discussed in households throughout the housing community. The more he imparted fair and objective law enforcement tactics throughout the community, the more the community came to respect not only his presence but his position of authority within their community.
In early 2004 Sheriff Patten transferred to Adams County Sheriff’s Office where he worked in the position of Criminal Deputy working in a dual capacity as a certified K-9 Officer and on the Special Operations Team as a Metro Narcotic Agent.
Sheriff Patten’s dynamic nature and eagerness to learn did not end with the procurement of law enforcement skills. For eight years, he made the decision to serve and lead at Integrity Mortage, LLC and Vision Development, LLC, as a state-certified mortgage loan originator. As a representative of both businesses, he worked diligently to help mold and change the lives of those living in his community for the better.
Sheriff Patten deeply believes in community policing and corrections, with committed conviction for connecting the community with a deeply rooted philosophy of cross-pollination of Consideration, Communication, and Collaboration within the Adams County community, whereby peace officers, businesses and citizens work together to identify and seek long-term solutions to reducing and/or eradicating crime and neighborhood decay with focused perspective on increasing quality of life for the entire Adams County community.
Considered an example of excellence in practice, Sheriff Patten completed course work at Copiah-Lincoln Community College and received his Associate Degree in Criminal Justice, December 13, 2017. He is presently working towards his BA degree in Criminal Justice through online studies at Jackson State University and is looking forward to his long term goal of mastering the coursework for Ph.D. studies in Criminal Justice.
Currently, Sheriff Patten has successfully completed coursework to enhance his ever-increasing knowledge base as a newly elected Sheriff. He has successfully completed Executive Level Management Education and Training at the National Sheriffs’ Institute, as well as attended and completed course training facilitated by the United States Department of Justice Drug Enforcement Administration in Diversion Opioid Awareness Training.
Sheriff Patten was re-elected to the office of Sheriff in November 2019 and was sworn- in on Thursday, January 2, 2020, surrounded by his children, friends, family, and as a newlywed to Brittany West-Patten. My motto for the kids is simple: As you set a goal for yourself, don’t compare yourself to anyone else. Challenge yourself to be better than you were the day before. If you do this and stay hungry, no one else can compare to you!
Published January 10, 2020 Print