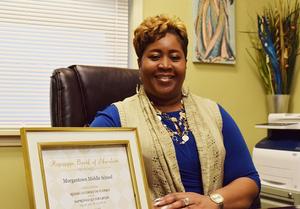 Morgantown makes progress and shows enough growth to become a passing school
When the Mississippi Department of Education released school performance scores back in September, Morgantown Middle School improved performance by a letter grade. After 12 years as a failing school, Morgantown had finally made progress and shown enough growth to become a passing school. Last month, Rankin received a certificate of achievement from the Mississippi Department of Education along with a letter congratulating her school on their accomplishment and thanking them for contributing to the advancement of the state.
Shameka Rankin’s decision to go into education was not a moment of sudden realization. While attending school in her home town of Woodville, Mississippi, a teacher predicted that she would pursue a career in the field of education. Ironically Rankin’s first classroom was right next to that teacher. She has been an educator for the past 17 years, serving in 4 school districts. She has taught in Wilkinson County, Claiborne County, Jefferson County and is now on her second tenure in Adams County.
Rankin said, “In addition to implementing new academic strategies, I had to focus on changing the mindset of my staff, students, and parents. Everyone had to buy in for us to progress. We all had to understand that a positive school climate and school culture promotes students’ ability to learn. Through higher expectations, our school is driving competition, between teachers and their coworkers, students and their peers. I believe wholeheartedly that students don’t know how much you know until they know you care, the same goes for teachers and parents,” Rankin said.
In keeping with her goals for next year, Rankin plans to continue to work to improve the school’s academic performance and to make sure the strides made to build a positive climate at Morgantown are not forgotten in the daily grind. Instead of a culture where kids slip under the radar, I want to continue to work on an atmosphere where our students notice their peers struggling and their first instinct is to help them.”
Published January 17, 2020