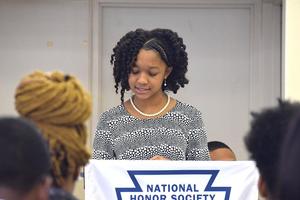 Carleigh Sproulls, the president, served as mistress of ceremony. Other program participants were the Presentation of Colors by NHS AFJROTC, the Pledge of Allegiance led by vice president Desnick Bolden, the National Anthem by Akayla Miller and a musical selection by Daniah Lewis.

Students received certificates and were pinned by Eric Jackson and Dr. Irene Amos. In his closing marks, Principal Jackson thanked the parents for supporting their children and congratulated the students for their success and achievements. He also announced the building of a new high school to a very excited audience.

The National Honor Society was established in 1921 and has been the nation’s most respected organization associated with recognizing outstanding high school students. Honor Society members at Natchez High give back to the community through special projects. The group recently delivered hand-knitted scarves to patients in local nursing homes.

Click the link below to view pictures from the ceremony.