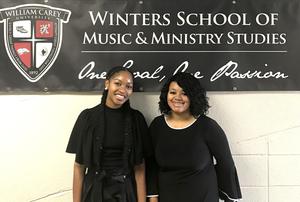 Two Natchez High School students got the choral experience of a lifetime.  Daniah Lewis and Akayla Miller traveled to Hattiesburg, MS, and participated in the 2nd Annual William Carey University Honor Choir.  For two days, these students rehearsed choral selections with other honor choir students from across the state of Mississippi.

“This year's honor choir has a strong field of musicians and students,” said Jim Armstrong, Coordinator of Choral Activities for William Carey University.  “I am thrilled to have my former High School Choral Director, Dr. Tim Coker as our clinician this year!”

Dr. Tim Coker is a native Mississippian and Emeritus Professor of Music at Milsaps College.  Dr. Coker went to Milsaps in 1984 after teaching choir at Tupelo High School for twelve years.  While at Tupelo High School, his choirs received national recognition performing at such places as The National Cathedral and Kennedy Center in Washington, D.C.  During his tenure at Milsaps, he took numerous groups to perform in Europe.

Both students were given the royal treatment from the university and made connections with other students across the state and with students currently attending William Carey University.  They were treated to concerts by choirs and ensembles from William Carey and the Oak Grove High School’s Women’s Choir.

The weekend came to a resounding crescendo as the William Carey Honor Choir performed the selections they rehearsed over the weekend.  Among the selections performed was a moving rendition of It Is Well With My Soul and a hand-clapping arrangement of When The Saints Go Marching In.  Daniah and Akayla both auditioned for choir scholarships and have received offers from William Carey University.