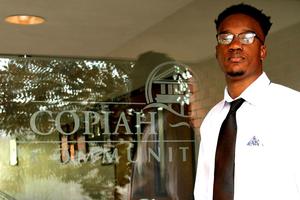 Selvalas Gould, Jr. is excited about the unexpected honor
by Morgan Grover
NEC@ Co-Lin senior Selvalas Gould, Jr. has been selected as Mr. Co-Lin for the Natchez, MS campus. “I did not even know I was in the running for this until yesterday,” Gould said. “They called me and told me I had been nominated and selected.”

Gould is excited about the honor but says it was completely unexpected. “I had no idea this was going on, and I was shocked to find out about it,” Gould said. “I don’t think this entire process has even sunk in for me at this moment.”

Gould believes he was chosen for this honor because he is a likable student who works hard, engages in class, and enjoys learning. “I like asking questions and getting involved,” Gould said. “While all of the virtual learning has been a bit of a challenge because I prefer being in the classroom, I think the fact that I want to do a good job
speaks well for me.”

As a student at NEC@ Co-Lin, Gould’s high school years have been mixed with those of a college freshman and sophomore. “Being a student at NEC has been great for me because the whole experience has been one of a close-knit family,” Gould said. “The faculty and staff work with the students to succeed, and I think I would have missed out on this at a major university.” Like many of his peers, Gould is set to graduate with his Associate Degree in May of this year. He plans to attend The University of Southern Mississippi in Hattiesburg to pursue a degree in Biomedical Sciences. While his exact career plans are still developing, he said he is leaning more toward laboratory work in the medical field.

Gould can recall the most joyous times of his time at NEC@ Co-Lin are those shared with his peers. “This year has been difficult because we have all been scattered,” Gould said. “The best times were when the Co-Lin cafeteria was open, and we could sit and talk and eat between classes. The food was really good, too.”

Gould has learned a lot about himself and what he wants to do with his life as a NEC student. “The faculty and staff are very helpful with helping you reach your potential,” Gould said. “I would suggest any new student just try to come out of their shell and open themselves up to new things, and their ideas and perceptions may change.”

Gould thanks all of the faculty and staff of NEC and Co-Lin for this honor and opportunity. “I thank God for putting me on this path, and I thank my family for their support,” Gould said. “I want to thank some of my favorite teachers as well, Mrs. Tanner, Mrs. McFarland, and Mr. Ensminger. I mean, how can you not like Mr. E.?”