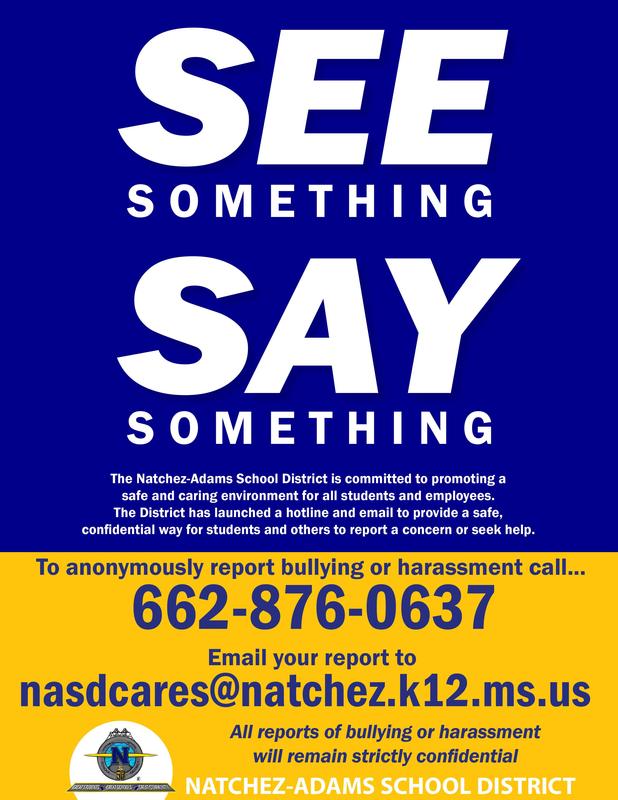 The District has launched a hotline and email to provide a safe, confidential way for students and others to report a concern or seek help.
By Rita Brooks
More than 250 students, support staff, presenters, and volunteers from the area participated in the 2018 Youth Bullying and Peer Pressure Summit. The Saturday morning event got students involved in informative sessions that ranged from domestic violence to ACT Prep. The event took place in the auditorium at Natchez High School.
This year’s event began with a skit written by Natchez Freshman Academy’s Chameiko Miller and performed by her 5th Period English I class. Cast members were Jah’Keria Carter, Jalen Harried, Shania Peavy, Jermaine Kaho, Xavier McGowan, Jer’keria Anderson, JaVae Harris, Jayden AsSabor, Ernest “Lil’ Tony” Fields, Lawarren Browders, Imani Kelly, Zackery Gossett, Eric Norman, RoQuia Jackson, Alfred Owens, Travion Jones, Jillian Turner, Bryce Collins, and JaDarrius Jackson. The skit narrator was Mr. Henry “Gospel Slim” Davis.
A victim of abuse, Glennese Smith Scott presented a session on Domestic Violence and Teen Pregnancy. Scott believes that more young people fall victim to serious physical abuse than we realize. “We don’t really know how many young people may be trapped in violent relationships,” says Smith. “I want to make sure I educate each one I encounter by sharing my story.”
A discussion presented by Zadier Thomas, a trainer for Families First for Mississippi outlined the many resources available to students and their families across a variety of areas that highly impact the health and future success of young people. Families First for Mississippi is expanding Governor Bryant’s Healthy Teens for a Better Mississippi initiative throughout the state to include educational and innovative programs on healthy choices to engage teens.
During a session on Gang Violence, Lieutenant Cal Green with the Adams County Sheriff’s Department said that the most recent incidents of violence in Natchez are a cause for community concern. Officer Green talked about her experiences growing up in Natchez when times were quite different than they are now.
Other presenters for the Summit were Miss Tukiiya Stephens, Assistant Principal at Robert Lewis Magnet School and Lisa Lewis, School Test Coordinator at Frazier Elementary School, the Natchez Police Department and the Natchez Fire Department.
One common message throughout the Summit was the abundance of information, resources, and programs geared toward helping students deal with difficult situations from bullying to preparing for the ACT.
Published November 2, 2018 Print